A quick Head to Head: Daytona Vs. Speedmaster

“Both evolutions of watches first conceived in the late 50’s, it was in the mid sixties that Rolex and Omega really honed the design of these two iconic references.”

10 years on from the very first Speedmaster that premiered the external tachymetre bezel, this innovative design was becoming more widely adopted and Rolex, amongst others, had copied the idea for their first Daytona, initially just in steel like the 6239 we are looking at here, but eventually also with a black acrylic insert for the ref.6241.

Side by side it’s easy to see the the different design approaches taken. Aside from the difference in size (the generous proportions of the Omega’s 39mm case against Rolex’s 37mm) it is clear that Omega were aiming for a more instrument led design while Rolex are chasing something altogether more refined.

The all black, painted luminous dial of the Speedy is no-where near as ‘punchy’ or sophisticated as Rolex’s contrasting sub-dials, applied metal batons and beautifully serifed script. Although more primitive in design, the lavish quantities of Tritium lume and stark white luminous hands offer exceptional legibility compared to the Daytona’s lume dots, metal hands and non luminous seconds recorder.

The bezels here contrast nicely with the Daytona in polished steel and the Speedmaster in black acrylic, but Rolex at the time also offered the Daytona with an acrylic bezel for the 6241. The demarcations give a clue as to their intended purpose, Omega’s indexes starting at a rapid 500 units per hour whilst Rolex opted for a more ‘civilian’ 200 UPH, perhaps better suited to ‘the man about town’ or gentleman racer, rather than professional pilots and engineers. 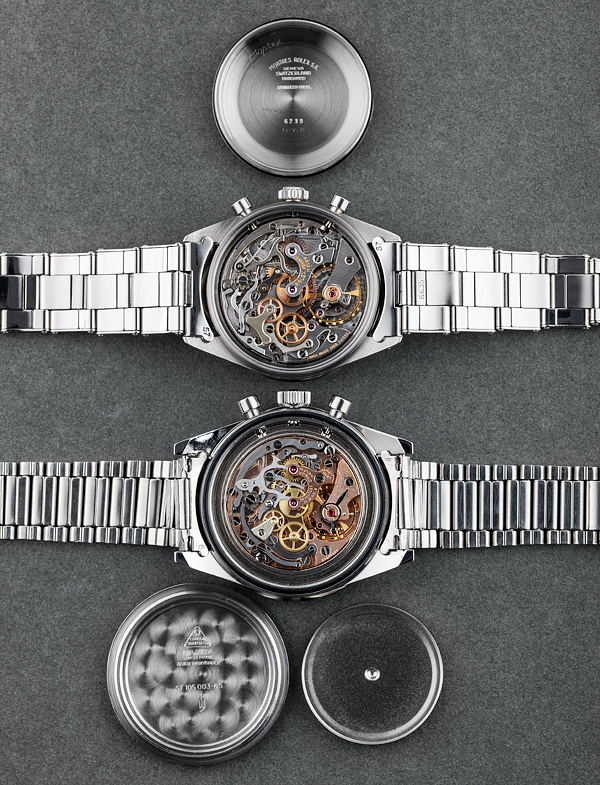 Flipping the watches over, we see both have been equipped with robust screw down case backs, but the Omega features an additional fitted dust cover, protecting the movement even when the back is removed, later examples are stamped “antimagnetic”.
The copper coloured Omega 321 calibre (designed and built by Lemania) is the same movement that was selected by Patek to be their go-to chronograph movement until they developed their own for the 5170 in 2010.
Rolex on the other hand opted for the technically similar Valjoux 72 based 722 calibre movement, like the 321 it beats at 18,000 VPH, is manually wound and can be found in many other chronographs of the era, one notable modification is Rolex’s own microstella regulator. A smart rhodium finish always makes these movements look fresh as the day they left the Rolex factory…

For now, the Daytona is worth about 4 times what these Speedy’s sell for, is it justified? In terms of rarity and build quality, probably not. In terms of outright good looks, that’s subjective. We expect these 60’s Speedmasters to close the gap a little in the coming years but the truth is that both of these watches are both fine investments and the crowning jewel of 1960’s sports chronograph design…